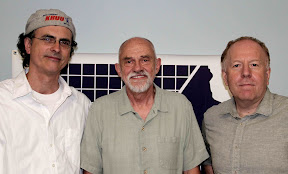 Policy has played, and continues to play, a critical role in the growth of the green sector. Learn how Iowa became the first state in the U.S. to pass legislation promoting the use of renewable resources and about other alternatives that have worked elsewhere.

Former Iowa state representative David Osterberg was chairman of the House Energy and Environmental Protection Committee as well as the Agriculture Committee. In 1983 he was instrumental in getting the first green legislation passed in the country under then governor Terry Branstad. He ran as the Democratic candidate for U.S. Senate in 1998 and worked for one year as a consultant to the Iowa Department of Natural Resources. Osterberg holds an M.S. in water resources management and another in agricultural economics from the University of Wisconsin-Madison. He is an associate clinical professor in the Department of Occupational and Environmental Health at the University of Iowa. [Read more below.]

John Collins’ career began in the Hong Kong government, writing policy in the fields of marine, agriculture, fisheries, and United Nations. He then founded/directed a development and construction company that built houses, apartments, and community office buildings which included many eco features — such as high-spec insulation, passive solar, and rammed earth. Collins was also engaged in politics and national campaigning on GMOs and waste management issues and served as an elected local councilor in the U.K.

Collins joined MUM’s Sustainable Living faculty in 2008 and has developed a range of courses related to state, national, and international policy and governance to address sustainability issues. He has a joint honors degree from Bristol University, England, in Philosophy and Economics.

NEXT WEEK: The Dream Green series presents a focus on the University of Iowa with Liz Christiansen, director of the Office of Sustainability and Darice Baxter, environmental specialist, as well as walking tours of the Sustainable Energy Discovery District, the UI Power Plant, and the student gardens.

Listen to the full show here:

Read full transcript of the show: